Catherine Azeles, CFP®, RICP®, an Investment Consultant at Conrad Siegel has been named the winner of Central PA Leukemia and Lymphoma Society’s (LLS) 2021 Woman of the Year. During a 10 week campaign this spring, Catherine raised over $77,000 to help fund therapies that save the lives of blood cancer patients every day and research which has led to developments in all cancer treatments.

“Congratulations to our winners, and to all of our candidates and campaign team members who participated in this year’s Man & Woman of the Year campaign,” said Lauren Iannucci, LLS Regional Executive Director. “These exceptional volunteers are all passionate and determined individuals, and leaders in their communities. Together, we are getting closer to LLS’s goal of world without blood cancer.”

LLS is the world’s leading non-profit voluntary health organization dedicated to finding cures for blood cancers and ensuring that patients have access to lifesaving treatments. The funds raised through LLS’s Man & Woman of the Year are used for:

At Conrad Siegel, Azeles is committed to helping families achieve their financial dreams. She works holistically with each one of her clients to explore their current financial situation and, craft the process for them to reach their goals.

Outside of her work at Conrad Siegel and being a mother, Azeles stays involved and helps educate her community through her involvement with the United Way’s Women’s Leadership Network and Investment Committee for The Foundation for Enhancing Communities (TFEC). She has also been featured in the media on ABC27, FOX43, WITF, and Forbes.

This is a question we often hear people ask – is now a good time to invest? Sometimes it is asked after the market has had a good run and is sitting at an all-time high. Other times it comes up when the market has been through a significant downturn.

When the stock market hits an all-time high, the media loves to talk about it and investors often feel like they will not have strong gains moving forward. However, the data says otherwise. The historical data indicates that over 1, 3 and 5 year periods after the market hits an all time high, the average subsequent performance is actually quite good. These are annualized (i.e. – average annual) returns and are quite strong. 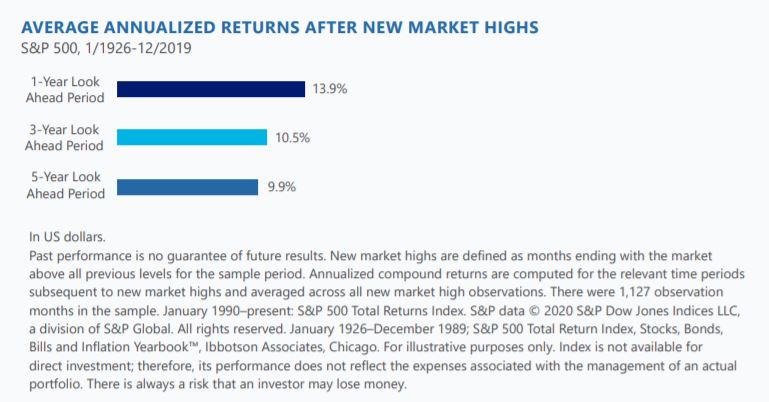 Let’s also look at the average performance of the stock market after the market endures losses of 10, 15 or 20%. This study shows that US stocks have generally delivered strong returns over the following 1, 3 and 5 year time periods following a steep decline. In nearly all cases, the subsequent performance is above the long-term average annual return of equities. 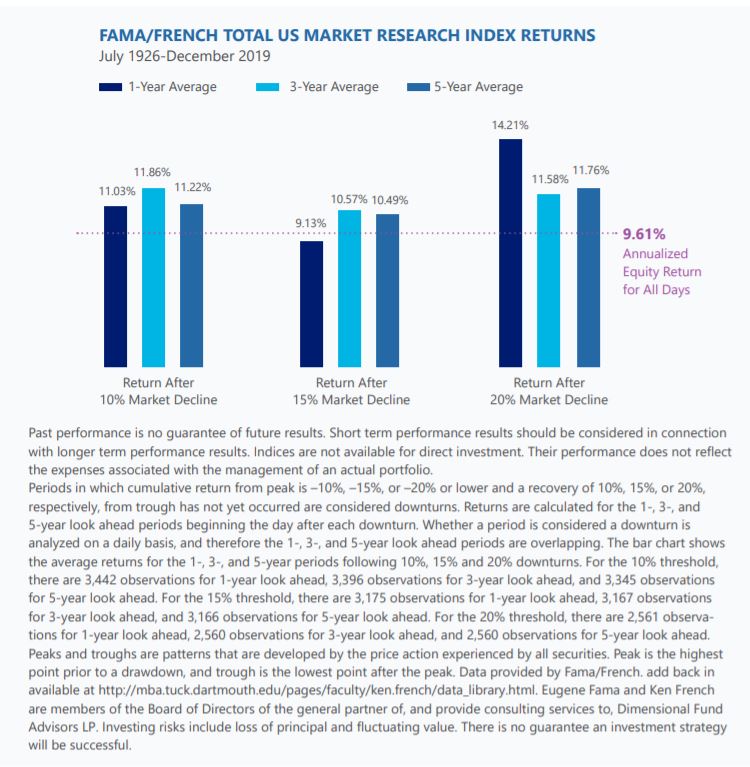 So what have we learned? If currently invested, sticking with your plan helps put you in the best position to capture the recovery. If sitting in cash and waiting for the best time to invest, often we end up waiting well past the optimal point in an effort to capture perfect timing. Data suggests it’s impossible to time the market, so investing either via a lump-sum or gradual dollar cost averaging approach is often the most prudent strategy when investing a cash position.

There is a lot of talk about inflation these days. Indeed, there are many economists and policymakers who are on national TV or writing articles online about how they are forecasting higher inflation through the rest of the year. They argue that with interest rates being so low, so much Federal stimulus money flowing through the economy, and the economy emerging from a pandemic, prices will rise faster than many people expect. However, let’s take a step back and review what exactly inflation is, how it affects the economy, and what can be done about it.

Inflation is the general rise in prices in an economy. Its presence typically means that an economy is growing, especially when inflation is accompanied by rising wage growth. The 2% rise in milk prices when you go to the grocery store won’t matter as much to you if your wages have kept up. Supply and demand for goods and services are in relatively good equilibrium. An increase in inflation doesn’t mean that prices for all goods and services are rising in unison, just that a “basket” of these have shown price increases overall.

It makes sense then that the amount and rate of change of inflation matters. When inflation is low and stable, wages have an easier time keeping up, and consumers can make adjustments to their budgets relatively easily to combat rising prices. The FED has come out in the last year saying that they are targeting an “average” of 2% inflation, meaning that continued they are okay if inflation runs higher for a time, just so the average is about 2%. This rate of inflation, in their eyes, means that the economy is in equilibrium, with prices rising just enough so that the economy can grow at a sustainable rate. However, this has been quite the difficult task over the last ten years:

As mentioned, rising inflation numbers are typically synonymous with a growing economy (if it’s not, it’s called stagflation, where there is inflation but no growth in the economy), and therefore are also synonymous with rising interest rates, mostly in the long-term end of the curve. When inflation expectations rise, longer-term yields typically rise along with them. This can play havoc in the bond market. Rising rates and inflation mean that the purchasing power of each coupon (interest) payment an investor receives has declined.

In addition, those with longer duration bonds in their portfolios will see larger price declines as rates rise. This is typically a short-term phenomenon though. Looking back over the last ten years, there have been two times when rates rose dramatically over a short period. Both times, the Barclays U.S. Aggregate Bond Index, a benchmark that tracks intermediate-term bonds, bounced back in the year after the dramatic rise ended:

With both inflation and inflation expectations rising, then, why is the FED sticking to the original script and forecasting no rate increases until 2023? The FED has a dual mandate of price stability and maximum sustainable employment. As mentioned, they came out last year with an updated inflation goal of an “average” of 2%. This means that they will allow inflation to run hot (over 2%) for a time before considering raising their benchmark rate. While current inflation is approaching this 2% target, they still are not worried. Why? There is still considerable slack in the jobs market despite the unemployment rate falling by over half since the pandemic started: The economy has yet to regain over 9 million jobs lost from the pandemic.

The FED sees this and thinks that with this much slack in the jobs market, price pressures due from rising demand may be transitory due to short-term stimulus from the Government. Inflation can be a good thing, especially when it’s not volatile and it’s expected. However, when inflation runs too high, or when there are unexpected shocks, that can cause mayhem in markets. The FED’s job is to manage this inflation risk, taking into account many different factors, hopefully smoothing out any volatility that could arise.

There is certainly some pain being felt in portions of the markets with rates rising. We have already seen bond funds posting negative returns due to the increase in rates and the low starting point. However, it is also not desirable for investors to earn close to a 1% nominal yield on their bonds in the long-run. Certain parts of the equity markets that increased dramatically on the backdrop of low interest rates have already started to see a pull back with rates moving north. However, this could be viewed as a healthy correction and other parts of the markets that did not have the same large rally in 2020 are showing some stronger performance. We don’t yet know the length and magnitude of this current rising rate environment, and inflation certainly can be problematic. However, it is important to know that higher rates and inflation expectations can be a good thing, especially when accompanied by strong economic growth, which is what we are seeing now as we emerge from this pandemic. A historic recession and unprecedented fiscal/monetary response is likely to result in a recovery that has its stressful and uncertain moments. But as always, we believe it is important to keep focused on a strategy that matches your time
horizon.

Many investors are focused on the “when”, “where”, and “how much” questions when it comes to retirement. Much of financial planning is focused on these questions too. In this column, we focus on other important items to consider in the years before retirement. These strategies may make a positive difference as you embark on financial freedom and security.

Estate Planning
If you die without proper estate planning, it could create unnecessary anxiety for those left behind and needlessly waste a portion of your assets on taxes, attorney, and probate fees. Have a lawyer review your will, account titling, powers of attorney, medical directives, and beneficiary designations to make sure everything is up-to-date and appropriate for your stage in life. You want to be certain that you and your beneficiaries are properly protected. Knowing that you are prepared should provide peace of mind.

Organize Necessary Documents
Now that your documents are up-to-date, do your loved ones a favor and organize it all in one place. Conrad Siegel has developed a Personal Roadmap to help with this task. Also, sharing a duplicate set of documents with a trusted family member or attorney is a good idea. Contact your Conrad Siegel Investment Consultant or e-mail askaquestion@conradsiegel.com to request a copy of our Personal Roadmap document.

Health Care Insurance
Medicare begins at age 65. If you plan to retire before 65, make sure you understand your health coverage options and costs. Even after Medicare begins, some costs are not covered. For that reason, you will want to investigate Medicare supplement plans that fill in the “gaps”. The Medicare program is complex. Applying late may cause delayed benefits or increased premiums. Make sure you know the rules for your situation. You may also want to consider long-term care insurance.

Take on debt while working
As a rule of thumb, large debts should be avoided for most retirees, but there are circumstances where new debt can make sense, such as financing a new home for retirement or an RV for traveling. Why now? The loan application and qualification process will be easier while you still have earned income. You may be able to negotiate lower interest rates and better terms if you have a solid credit score and low overall debt.

Use vacation time to “test drive” retirement
Make a list of the areas you might consider moving to during retirement and use your vacation time while you are still working to visit them. If you enjoyed it in the winter, go back in the summer as well. Who knows, it might end up becoming your future home.

Declutter
If you plan to move or downsize in retirement, then get your home ready now. Clear the clutter, complete the repairs, and update whatever is necessary to tip the sales process to your advantage.

Retirement planning is not a DIY project
Planning for financial independence is not a do-it-yourself project. Work with your Conrad Siegel investment consultant to make sure your financial plan is up-to-date. You have saved your whole working career for retirement, you do not want to cut corners as you approach the home stretch.

Schedule an introductory phone or video call with an adviser

With your financial goals in mind, fit matters most. A 15-minute phone call will give us the chance to make sure your situation matches our expertise.